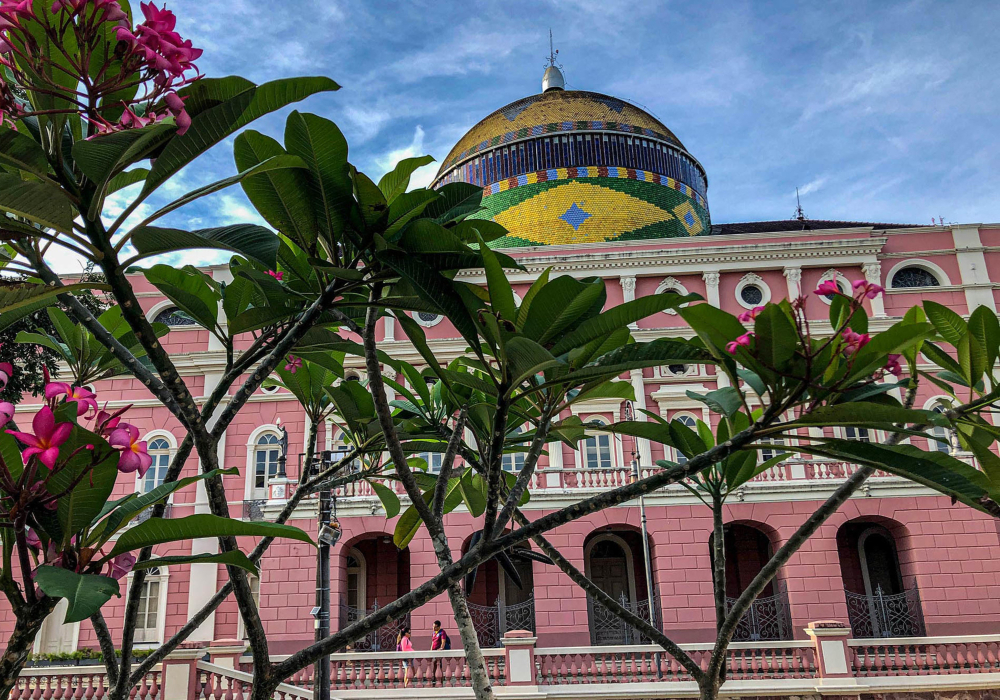 As part of my Rio Carnival and São Paulo trip to Brazil earlier this year, I made my way up north to the city of Manaus — known as the door to the Amazon Rainforest. Manaus, also referred to as the Heart of the Amazon, is the capital and largest city of the Brazilian state of Amazonas. The seventh-largest city in Brazil sits near the confluence of the Rio Negro and Solimões river — just a few kilometres to its east.

Manaus traces back its origins to 1699 when it was founded as the Fort of São José do Rio Negro. As the settlement grew into a fully-fledged town, it was later named “Manaus” in 1832 (after the Amerindian tribe of Manáos). The current spelling came into use in 1939. The city's 350th anniversary was celebrated recently, in 2019. As I walked along the streets of Manaus, I could see many murals and street art celebrating the milestone anniversary.

There's still a definite lingering vibe of the past glory days and great pride in the city's history. Rubber made Manaus the richest city in South America during the late 1800s. Many wealthy Europeans were attracted to the state of Amazonas to capitalize on the economic boom from natural rubber production from the tree Hevea brasiliensis. As a result, Manaus became known as the “Paris of the Tropics.”

One of Manaus' crown jewels, the Teatro Amazonas, or the Amazonas Theatre, was built in 1896 and served as a symbol of the city's wealthy and sophisticated merchant class of rubber barons. The iconic opera house was renovated between 1987-90 and attracts many international visitors drawn to its impressive architecture and golden dome.

The still-active Amazonas Theatre is adjacent to a central square, known as the Largo de São Sebastião, surrounded by lush trees and many beautiful colonial-era buildings high in colour and charm. The historical buildings house various restaurants, shops and boutique hotels, including the recently-built Juma Ópera. This area represents the heart of Manaus' historic center.

The Monument Abertura dos Portos (Opening of the Ports Monument) stands at the square's centre. It was inaugurated in 1900 to commemorate the liberation of the Amazon River ports to foreign trade in 1866. The monument symbolizes the four corners of the world: Asia, America, Africa and Europe, each represented by a ship.

The stone design's undulated patterns covering the square's floor are meant to illustrate the meeting of the waters of city's legendary rivers. The artwork was inspired by the sidewalks of Copacabana, in the city of Rio de Janeiro.

A pleasant walk or short Uber ride away, the historic Adolpho Lisboa public market (Mercado Publico) is a must-see on any visit to Manaus. Built between 1880 and 1883, the picturesque market is still a very active hub for both locals and visitors. It's a centrepiece of an entire neighbourhood near the Manaus Port featuring many street vendors, a nearby historical cathedral and many heritage buildings, such as Manaus' oldest tribunal and church.

The Port of Manaus is where departing boats taking visitors to their Amazon​​​​​​​ jungle trek adventures or the meeting of the waters start from. But the port is first and foremost an important commercial centre for ocean-going vessels travelling the Amazon.

As I embarked on small boats from the Manaus port on two separate days, it was exciting to take in the bright colours of surrounding ships, big and small, as well as the maritime sounds and smells. If you're lucky to set out on a sunny and clear-skied day, the contrast of the shining black Rio Negro against the cerulean sky is breathtaking.

The place where the Solimões river and the Rio Negro meet to ultimately form the Amazon River, starting ten kilometres east of Manaus, is a major tourist attraction. Known to the Manaus locals as encontro das aguas, the interesting phenomenon creates a colourful juxtaposition of the dark Rio Negro and the cafe-au-lait-coloured Solimões river. Spectacularly, the two rivers run side by side for six kilometres without mixing significantly.

This is due to their different compositions resulting from the sediment-rich characteristics of the Solimões river inherited from the Andes Mountains and the dissimilar influx from the decayed leaf and plant matter from interior jungles and Colombian hills, giving the Rio Negro its dark hue. The water from the Solimões is cooler and denser, while the waters from the Rio Negro are warmer and slower. They eventually merge to become the Lower Amazon River.

Further along the Rio Negro, on the west of Manaus, is the magnificent Phelippe Daou Bridge or Rio Negro Bridge. Named after a renowned Brazilian journalist and entrepreneur, the 3,595-metre (11,795 ft) long cable-stayed bridge over the Rio Negro links Manaus and Iranduba.

Officially inaugurated on Oct. 24, 2011, after nearly four years of construction, it's one of the largest bridges over fresh water on the planet, second only to the crossing of the Orinoco in Venezuela at Ciudad Bolivar. Before the Rio Negro Bridge's construction, it took about forty minutes to cross the Rio Negro by ferry. The five-minute journey now across the bridge's 3.6 kilometres has not only helped break the isolation of Manaus' surrounding communities but also helped spur economic growth.

Most of the tourist boats departing Manaus and heading towards Amazonian jungle adventures pass under the Rio Negro Bridge. Get your camera phone or DSLR ready for some pretty fantastic photo opportunities.

Further west of Manaus, along the Rio Negro, many exploration opportunities are available from riverside floating restaurants in and around Iranduba, priceless wildlife viewing, jungle trekking, meeting the indigenous people of the rainforest, and visiting the Anavilhanas archipelago, a UNESCO World Heritage site with more than 400 elongated islands.

Category: Luxury
The Houghton Hotel is Johannesburg's newest 5-star property. It's so new that I wasn't even listed on the Uber app. I instead had to add the adjacent Houghton Golf Club's address…