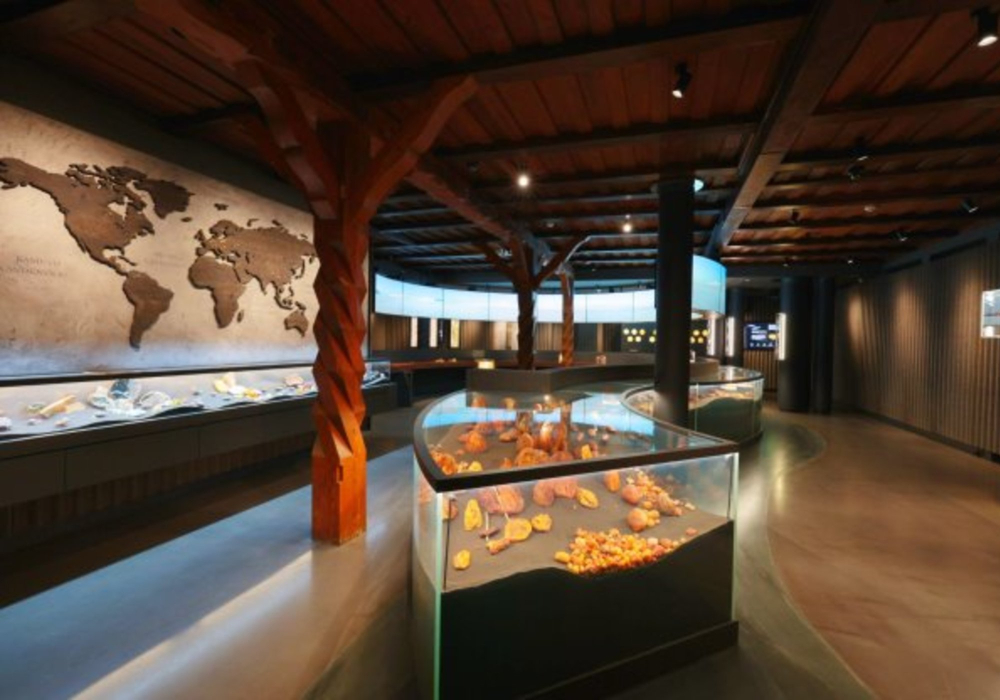 Lithuania has introduced a new museum of amber in order to showcase the legends surrounding this compound’s mystical healing properties, inquire into its scientific characteristics, and preserve the cultural heritage of the Baltic region. The new Mizgiris Amber Museum is strategically located in the resort town Nida on the Curonian Spit that has been inscribed on the UNESCO World Heritage List for its distinct flora, unique fauna, and ethnographic legacy.

November 5th, 2021. Characterized by immense drifting sand dunes, tourist-favorite beaches, and unique cultural heritage, the UNESCO-listed Curonian Spit of Lithuania is one of the most-visited parts of the Baltics. That is why the new Mizgiris Amber Museum has been situated in Nida—a resort town located at the heart of Curonian Spit, where amber collecting has been considered as the traditional craft of the region. The museum seeks to preserve the unique history of this Baltic legacy, commonly referred to as “Lithuanian Gold”, and introduce it in a new interactive way.

“Amber has played a significant role in Lithuanian culture. Baltic tribes used solid amber as early as 2000-1800 BC to craft jewellery and weaving tools, treat diseases and shield people from evil spirits. Meanwhile, amber incense was used to protect children, newlyweds, and soldiers going to war. We seek to showcase these amber traditions through the expositions of our museum,” said Virginija and Kazimieras Mizgiris, museum’s founders and locally-renowned cultural activists.

Continuing the deeply-rooted amber traditions, amber is widely used in Lithuania to this day, for instance, in the Lithuanian wellness industry. Since these agents are known to strengthen the immune system, some SPAs utilize amber oil to perform massages and other procedures. Also, the material has been found to exude extra health-boosting compounds when heated, therefore, a few wellness centers utilize amber as tiling material for sauna interior. Educating the public about the material’s medicinal properties remains part of the mission of the people who are active in the amber industry today.

Before the new museum opened in June 2021, The Palanga Amber Museum was a major tourist attraction in Lithuania. However, it has a pronounced focus on the way this material was used in decorating Lithuanian palaces in the late 18th to early 20th centuries. Meanwhile, the main concept of the new museum in Nida is an amber river which showcases the path amber travels from nature to culture. The exhibition features rare amber and works of art, complemented by a virtual story on the formation of amber with its various forms, colors, fossilized inclusions, and more.

“What we seek to achieve with this exposition is presenting amber in a modern and interactive way. We hope to make the history of amber, as well as the Baltic legacy, more accessible to a broader audience—both young and old, foreign visitors and locals as it shines light on the part of Lithuanian heritage that has not reached the mainstream culture,” said Mr. Mizgiris.

This is not the first cultural initiative, sponsored by Mrs. and Mr. Mizgiris. The couple has been immersed in the amber business for about three decades and has founded several other amber galleries in Lithuania’s capital Vilnius and the Curonian Spit. They organize educational programs, art exhibitions, and have published several photo collections internationally. The passion for amber of Kazimieras Mizgiris is also reflected in his personal life as he has a collection of amber from all over the world.

The Mizgiris Amber Museum is located in Nida at Nagliu st. 27 and greets visitors all-year-round. Visiting both the famous resort town and the newly-opened museum allows visitors to experience Lithuania as a real nation of amber. In fact, Lithuania’s most recent tourism campaign makes the visit even more convenient as it promotes the opportunity to stay longer in the country by compensating visitors’ third-night stay in over 200 accommodation providers.

More information about Lithuania’s new tourism campaign can be found on: www.stayin.lithuania.travel

Category: Luxury
The Houghton Hotel is Johannesburg's newest 5-star property. It's so new that I wasn't even listed on the Uber app. I instead had to add the adjacent Houghton Golf Club's address…